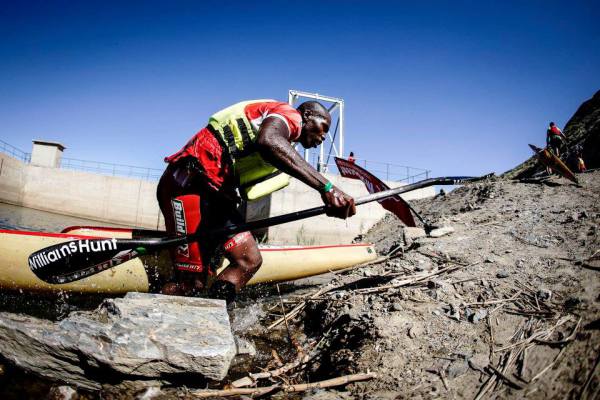 This photo is like that of a historic Zulu warrior, except in his right hand he holds not an assegai but a paddle. In his left hand is a kayak not a shield. His battleground is not a grassy plain but a meandering river. What hasn’t changed is his fearless fighting spirit and resolve. Thulani Mbanjwa is a fierce competitor.

The Green Kalahari Canoe Marathon may be a new race on the South African Calendar but is quickly starting to establish itself as an epic river marathon. Organizer Gawie Nieuwoudt places big emphasis on drawing South Africa’s talented teams of development paddlers to his race in the Northern Cape. This year almost half of the field was made up of “so-called” development paddlers. I say “so-called” because I don’t consider these guys to be development paddlers. These are well-trained and highly motivated elite athletes. Many have proved their prowess and skills on the waters of the Dusi river and you would be foolish to consider them anything but serious competitors.

Day One – Upington to Oranjerus – 30km

I didn’t had a terrible start and, with the depth of top end paddlers, was scratching at the back of a 10 paddler bunch. The river is wide with many different channels and rapids, so choosing the right line is very important. It was very tactical and taxing. 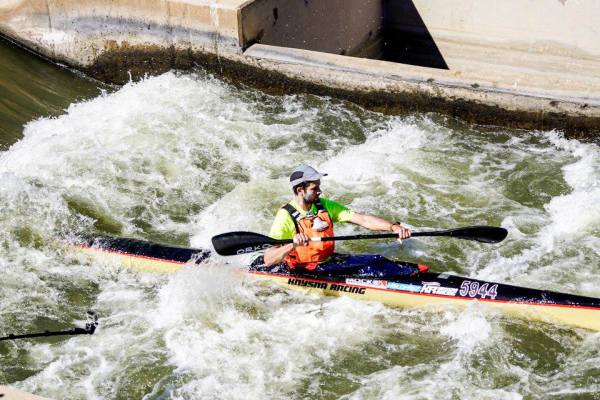 When there is a big bunch of guys together, there’s a lot of testosterone and frantic jostling to get the best position at the front wash (where you don’t have to work as hard). Eventually just after 20km, I was part of a 4 boat break-away. With me were Thulani Mbanjwa from KZN, Stu Maclaren (Western Cape) and Jakub Adam from Czech Republic. With some strong paddlers in the chasing pack we had to keep the pressure on until the end of the day, to ensure our hard earned breakaway survived.  The Czech, Jakub Adam, took the end sprint and Day 1 victory with Stu 2nd, me 3rd & Mbanjwa 4th.

I was in a relatively comfortable position going into Day 2, but my major concern was that there would be 3 portages and a total of 2.5km running the next day. Thulani is renowned for being an incredible runner and he was going to be very dangerous on the portages.

For the first half, we worked together to keep the chasers off .  We paddled some really challenging rapids and weirs that could end your race but we all got through safely (although I was secretly hoping for a mistake from one of the others). I knew that it was inevitable that Thulani (and possibly Jakub) were going to run away from me at the portage.  My strategy was to try to relax and be fresh enough to chase them when we got back on the water. You can really hurt yourself running too hard on a portage.

Portage 1:  The first portage played out exactly as I had expected and both Thulani and Jakub ran away from Stu and I. Jakub did incredibly well to stay with Thulani on the run. This was honestly the worst outcome for Stu and myself. Now Thulani and Jakub could work together to get a gap on us. They had roughly a 1 minute gap on us after the portage. Stu hurt himself too much in the run and wasn’t able to keep the pace, so I was alone in my efforts to chase the leaders. Meanwhile behind us Simon van Gysen portaged incredibly and closed the gap. He is a dangerous paddler and seems to have super human abilities at the end of a race.  Now we had three paddlers working together until the next portage at Neus Weir.

Portage 2 – Neus Weir:  This portage was made up of two quick successive runs intersected with a section of paddling in a irrigation canal.  It was a frantic scramble to get into and out of the canal and back down to the river where we would enter the infamous Neus Gorge. It was now just Simon and I chasing the two paddlers in front. 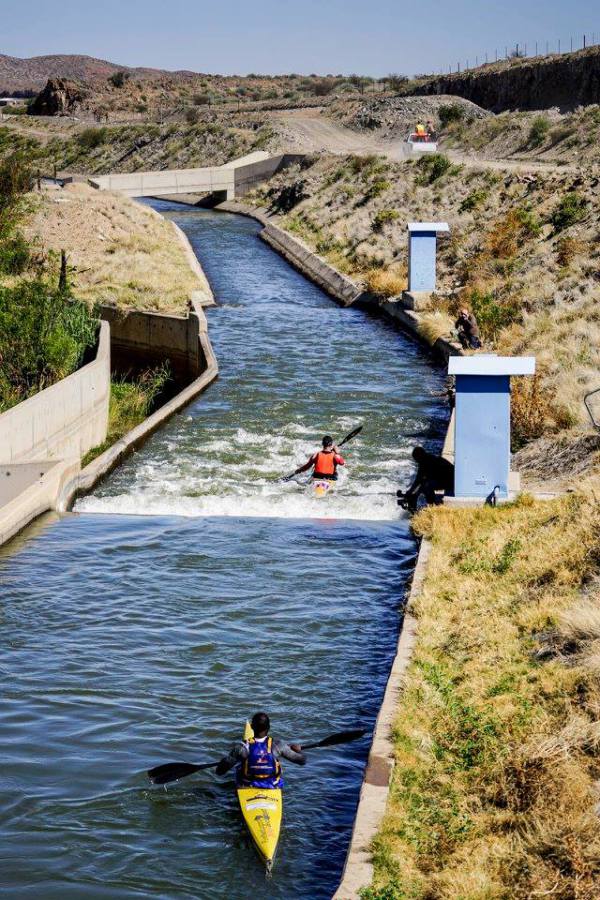 The Neus Gorge is an intimidating place with steep granite walls and gurgling angry water.  The water in the gorge boils and surges off the granite walls like an angry serpent from a fairytale underworld.  It also features the two biggest rapids of the race. Simon and I dubiously navigated both rapids, with some touch and go moments.  The force of the water made our boats feel like toothpicks in a tidal pool. We spotted Jakub on the bank who had taken a swim, but he caught up to us and was paddling like a man possessed. He is incredibly strong and was keenly eager to catch Thulani.  With 6km to the finish we would catch glimpses of Thulani and every time we saw him, Jakub would kick up the pace and charge ahead. Simon eventually relented and slipped off the back. Now it was just me and Jakub. 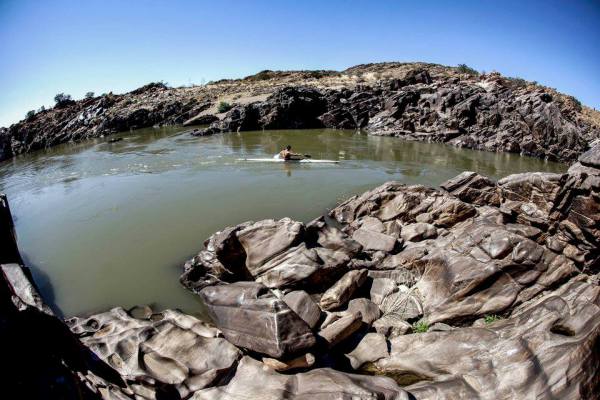 Hanging on, it was time for strategy!

I was hanging on but wasn’t confident I could beat Jakub on an end sprint. He is super strong. In my mind was a Google earth image of the channels leading into the finish. I had been studying them the night before and it showed how the river split into a myriad of different channels, some of which ended abruptly and others that lumbered around on long bends. If you took the wrong channel it could be disastrous and cost you perhaps years of your life!

Conversely, if you took the right channel you may just secure yourself a victory! Usually I would have done some research and tripped this type of thing beforehand but all I had to go by was a hunch and a pixelated google earth image. It was a big risk to take but I decided to have a crack at it. As we entered the channel section I slipped off of Jakub’s wash and headed for the channel I thought was best. I tried to visualise the route but it was a maze in there. All I could do was follow flowing water.

I came around a bend and spotted the end of the channel. Racing towards the exit, I caught a glimpse of Thulani coming past. I popped out 50m behind him and it was now a 800m dash for the line. I managed to hold Jakub off and was happy to finish second.

Simon had followed me down the channels but had taken a left where I had gone right. His channel closed up and he had to endure a worrying journey through a tiny tunnel of reeds which he only hoped would have a successful exit. He did manage to come out fine but it had cost him some time. He held on for fourth with Stu doing well to muscle through into fifth.

Thulani raced the perfect race. He played to his strengths and skills perfectly. I can’t remember seeing him make one mistake anywhere, which is very impressive because we were all racing on a course that was unfamiliar. His finesse on the water matched his strength on the run and it’s safe to say that he navigated the course better than anyone else. Well-done Banji!