Having clinched this year’s Dusi title just two weeks’ ago with EuroSteel partner Andy Birkett, Zondi again showed why he is regarded as one of the top emerging stars on the Msunduzi and Mngeni Rivers as his and Kayak Centre/Team Jeep’s McGregor’s efforts handed Zondi a rare Dusi and Non-Stop Dusi double.

“It is just unbelievable to have won both the Dusi and the Non-Stop Dusi this year,” said a thrilled Zondi afterwards. “I’m especially happy because Andy (Birkett) and I worked so, so hard before Dusi and so its really nice to enjoy the rewards now!  “I would also like the thank Hank for agreeing to be my partner right at the last minute as well as our seconding crew, without them we probably would have been tempted to have pulled out at some point today,” he added with a weary chuckle.

For McGregor, who took the event by storm in 2006 when he became the first person to win in a K1, the win is his second Non-Stop Dusi title.  “It is really hard to explain how much pain we went through, especially going over Burma Road portage,” said McGregor.

“It was an honour to paddle with Sbonelo today. He was just so strong and now I know exactly why he won the Dusi this year, he deserved it!

Having had Lance Kime and Thulani Mbanjwa close the gap between themselves and McGregor and Zondi to just twenty seconds at the bottom of the Nqumeni Hill portage, McGregor and Zondi knew they were going to have to dig deep in order to shake their rivals. 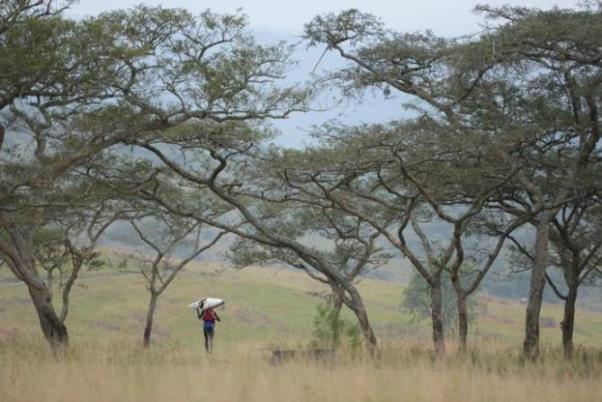 Despite the valley’s heat, a medium to low water level convinced McGregor and Zondi to make the brave decision to run the notorious Burma Road portage, a decision which reaped its rewards but not without much suffering along the way.

“We made a few mistakes below Inanda Dam and so I said to Sbonelo that we had to go over (Burma Road,” said McGregor. “It was unbelievably tough and I don’t think I have ever been so happy to see Durban’s surf!  “When Hank said we were going to run Burma I said to myself ‘Oh no!’” laughed Zondi. “I tried to push up Burma but I felt like I was going to fall over backwards a couple of times. I was tough, really tough!”

Despite having finished over twelve minutes behind the leaders, second placed Kime and Mbanjwa put in a stellar effort and pushed the leaders for much of the first half of the contest.  “Hank and Sbonelo were just stronger than us today,” said a humble Kime afterwards. “It was tight until Nqumeni but once they got away they just stretched and stretched their lead and there was simply no catching them!”

“The Non-Stop Dusi is such a tough race,” added Mbanjwa. “Just when you think you’ve prepared for the race it just keeps getting harder and harder!”  The runners-up also had their struggles throughout the long day with their perennial lean returning to make their race even tougher.

The women’s race was a ding-dong battle for much of the early part of the encounter as the Adie twins, Abby and Alex, went up against Robyn Kime in her K1.

The Adies however managed to edge ahead for the first time at Mission Rapid and, aided by Kime picking up a hole in the bottom of her boat, managed to steadily pull away and make the title their own.  “It really is so special to have won with my sister, especially after my Dusi disappointment,” said Abby.  “We didn’t have a single problem the whole day. We couldn’t have asked for a better day!” she added. 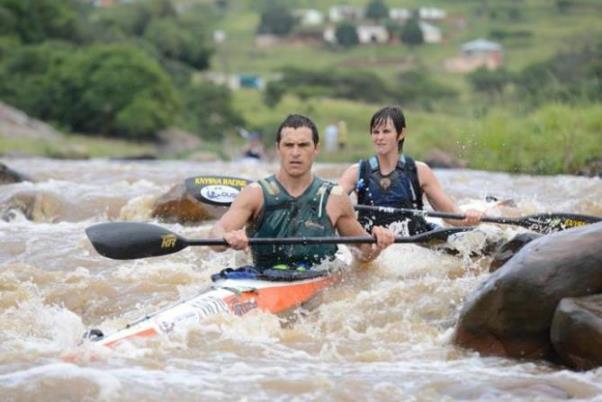 Having only just behind the mixed doubles category winners Jacques and Jen Theron, Alex denied they were racing against the Therons at any stage despite it being such a close contest in the end.

“We were with Jacques and Jen across Inanda Dam but they got ahead on the river,” she said. “We weren’t really trying to race them though, we had more of an eye on the race record but unfortunately we weren’t able to get there.” 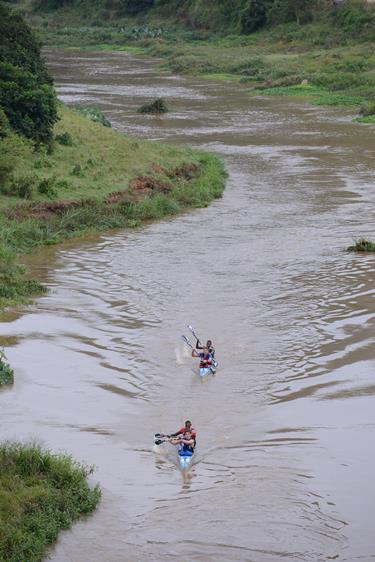 The pre-race banter between the mixed doubles entrants added a little extra motivation for the top crews with the Therons chuffed to have beaten Shaun Griffin and Hilary Bruss across the line.

“We had such fun up until 15 kilometers to go, then it wasn’t any fun anymore,” laughed Jen Theron afterwards. “We’re looking forward to our supper and three litres of Super M from Shaun and Hilary though, even though we have to wear our lifejackets to supper for our silly little swim!”

The ‘Dusi in a day’ sees paddlers make their way from Camps Drift in Pietermaritzburg to Blue Lagoon in Durban, along a similar route to that of the iconic Dusi Canoe Marathon, in just a single day. More info can be found at www.nonstopdusi.co.za