Conditions were cool and windless, and the Albert Falls Dam was calm, as a phenomenal 632 boats lined up to race.  The race starts with a 4km lap on the dam and onto a 1km portage around the dam wall.  At the takeout, McGregor and Mocke led into the portage, with Andy Birkett and Sbonelo Zondi just behind them in second, Cam Schoeman and Jakub Adam in third, followed by Len Jenkins and Matt Bouman in fourth, and reigning Dusi K1 champion Lance Kime and Thulani Mbanjwa in fifth.

“We didn’t know what to expect. We’re up against pure Dusi crews here and I said to Jasper just before the start we have to try and stay in contention and hopefully catch up on the water, but we seemed to dominate the portage and we got out first and put in first, so that’s a big confidence boost for the two of us so early in the season,” said McGregor after clinching victory.  “We got into the boat for the first time just over a week ago, just before the Vaal, and straight away felt nice and comfortable,” said Mocké.  The pair’s victory comes on the heels of their win in the Vaal Canoe Marathon last weekend, which also served as SA K2 River Marathon Championships.

McGregor and Mocké underlined their fine form and fitness by reaching the water first after the portage, with Birkett and Zondi holding onto second and Kime and Mbanjwa moving up to third.

The two leading boats then managed to open a gap on the other chasers until, at The Cascades rapids, McGregor and Mocké put the hammer down and pulled clear to win by 49 seconds over Birkett and Zondi.

Cam Schoeman and Jakub Adam were in position to capture third, but they suffered a bent rudder about a kilometre-and-a-half from the finish and were passed firstly by Kime and Mbanjwa and then by Jenkins and Bouman.

“The race was very tough,” Zondi said after finishing. “There were a lot of good combinations, especially on the dam where six boats jumped to the front together.”  While he admitted to not being fully satisfied with their performance on the day, three-time Dusi champ Andy Birkett said he was satisfied with the rapid improvements the pair was making every time they paddle together.

“It was a tough race today,” said third place finisher Michael Mbanjwa. “I think we did alright. The field was very strong and Hank and Jasper are flying! Sbonelo and Andy are also very strong and managed to keep with up with them, where we couldn’t. But I think we’re getting better every day.”  “We’re trying to not read too much into results as this early stage, but we did notice that Hank and Jasper were very, very strong,” said Lance Kime. “We know their paddling will always be phenomenal and they also ran very well today. Andy and Sbonelo are also great all-rounders and they are both going to be very difficult to beat in the Dusi.”

Women’s winners Adie and Adamová bent their rudder at the Cascades Rapid, but not even the loss of one or two minutes put them under pressure.  “We’ve had a good day,” said Adie. “It was quite relaxed, especially on the dam. We just hung with the other girls and then just before the portage we put in an interval and broke ahead. From the portage there was no looking back and we pulled away.”

“It was so hard,” Adamová laughed as she described the portage. The Czech star recently finished second in the K1 division and third in the K2s at the Marathon World Championships and based upon the pair’s early season form, they are going to very tough to beat in the 2014 Dusi Canoe Marathon. 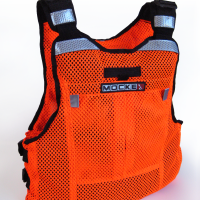 Did you know the Mocke Pfd’s front pocket can fit a hydration bottle? Plus cool and comfy…the perfect Dusi Pfd.
Click here for info or to purchase.