Squamish, Canada – It was a clean sweep of podium spots for Fish Hoek paddlers at the third annual Canadian Surfski Championships on Howe Sound as brothers Dawid and Jasper Mocké and Kenny Rice made up the podium at the race over the past weekend with Sean Rice, Kenny’s brother, finishing in fourth place.

The race takes place on the Howe Sound from Porteau Cove to the town of Squamish which is situated about 60km from Vancouver close to the skiing resort of Whistler, host of the 2010 Winter Olympic Games, and provided an exciting location for the tough 20.2 kilometre race.

“I got off the start line well and was feeling good heading to the turning buoy and hot spot,” Jasper Mocké said. “I was dicing with Sean Rice for the prize but he managed to put in a surge and got away from us around the only can on the course.

“I was in a bit of trouble as I turned fourth however I knew that I needed to get into my own rhythm and that’s what I managed to do.

“My pace was good but I realised that I couldn’t go too hard as I needed to maintain that pace until the end of the race.”

With around ten kilometres to go Mocké’s focus shifted to closing the gap between himself and the leading two of Kenny Rice and his brother. Once Jasper had caught and passed Rice the gap was too large to his brother who went on to win the race some 18 seconds ahead of him.

“I caught Kenny at about half way and that meant that we could work together to try and catch Dawid who had opened quite a significant gap.

“Working with Kenny meant that I was eventually able to rub him off my wave and then we were into some more runs despite the fact that we weren’t paddling very fast but I managed to get clear of Kenny and finish in second place just behind Dawid which I was happy with,” a satisfied Mocké mentioned,

Eventual race winner Dawid Mocké was happy with his race win in what turned out to be surprisingly familiar conditions. He attributes his success on the day to the pre-race preparation that he and Jasper did.

“The race really started with our pre-race reccie that we did of the Sound where we spent quite a bit of time checking out the way in which the water moved.

“Having this knowledge gave us a solid race plan and the confidence of knowing what you are going to do on race day really helped me a lot.

“Conditions weren’t too dissimilar to one of my favourite downwind runs back home – the Miller’s Run, but in reverse so I felt very much at home out there,” added Dawid.

The race was going to be a four-way shoot out as the South Africans made their presence felt early on with Dawid gaining the ascendancy relatively soon after the turn can and the conditions meant that if you managed to get ahead the chasing paddlers would battle to close the gap.

“Kenny and Jasper had great races and it was a real dog fight but as the conditions were if you had a fifty or 100 metre lead it was always going to be difficult to come back.

“I had to change tactics and lines a few times when I saw them getting close but I managed to hold out and it was nice to get a win and get back on the top step of the podium,” he concluded.

Kenny Rice rounded out the podium on the day with brother Sean finishing in fourth and Australian Mackenzie Hynard rounding out the top five spots. 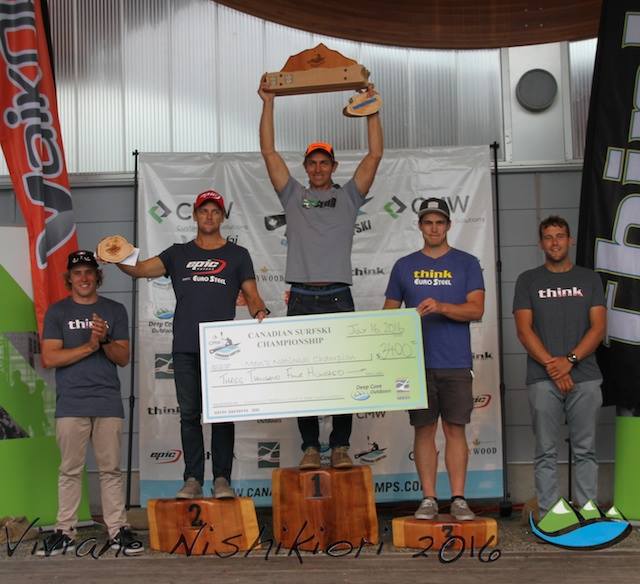