Blue Lagoon – The final curtain came down on the 2014 Dusi Canoe Marathon amidst a frenzy of celebrations after Andy Birkett and Sbonelo Zondi were the first to the finish line at Blue Lagoon in Durban in front of thousands of supporters, friends and family to round out a near perfect performance by the pair over the three exhausting days of racing in the Msundusi and Mngeni River valleys. 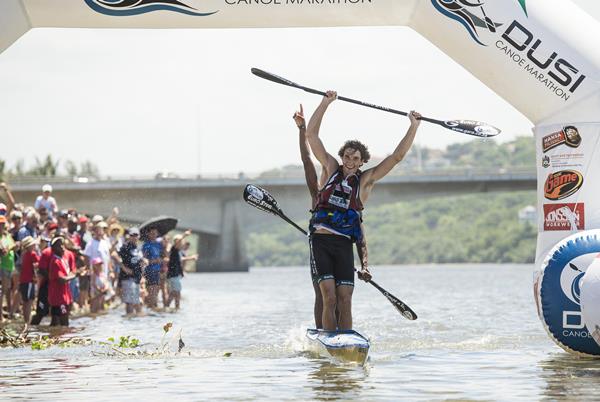 With nearly nine minutes in the bag overnight, many expected the leaders to back off slightly on the third and final stage and play it safe however the impressive pair instead hammered the final nail into the coffin early in the day and then pushed themselves to a personal record time over the treacherous Burma Road portage before experiencing the thrill of crossing the finish line in front of Blue Lagoon’s lined banks. 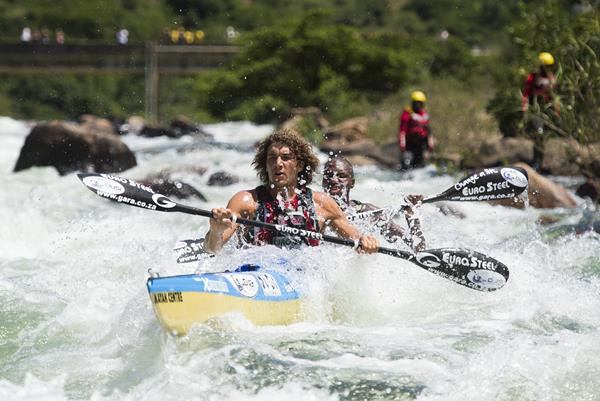 “The whole journey has been amazing! I’m super chuffed – especially with our discipline over this last year – and it’s a really special feeling to have won!” said an elated Birkett. “It almost feels like this is the first Dusi I’ve ever won because of the whole change in start procedure here on day three and the finish is a really amazing experience!”

“At last! This is a dream come true for me! I’m so very, very happy! I can’ event express how happy I am today!” added a beaming Zondi. 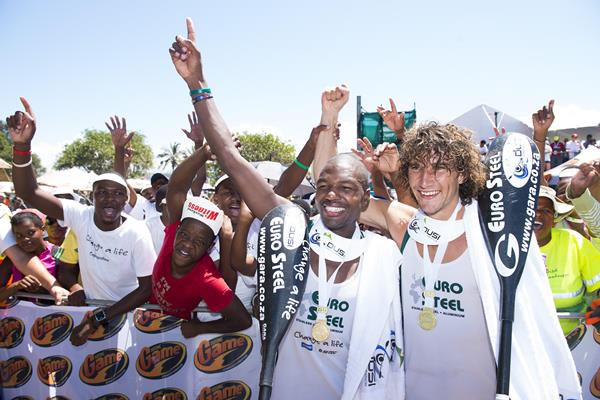 The unforgiving heat of day one and two continued into the third and final stage however, as predicted ahead of the race by many, the pair relied on their remarkable strength and character as they took on the tough Burma Road portage.  “We went up and over Burma even quicker than we did in our time trial two weeks ago,” said EuroSteel’s Birkett.  “Sbonelo timed it for us but when we put in at the bottom and he said 25 minutes and 20 seconds I thought I hadn’t heard him correctly! 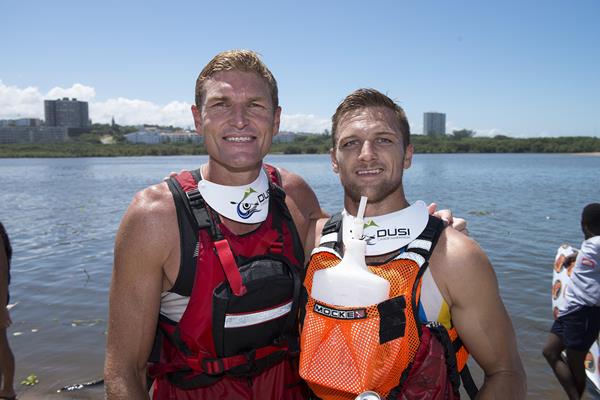 Triple Canoe Marathon World Champ Hank McGregor of Kayak Centre/Team Jeep and his surfski star partner Jasper Mocké put in a valiant effort throughout the three days however they were simply unable to match Birkett and Zondi.

“We gave it our all. We put everything we had into these past three days.. We were just beaten by two very good athletes,” said McGregor afterwards.  “We discussed things and decided to go over Burma (Road) and we gave it our absolute all. We only ended up losing two minutes to Andy and Sbonelo, which I thought was a brilliant effort from us, but they were just phenomenal. 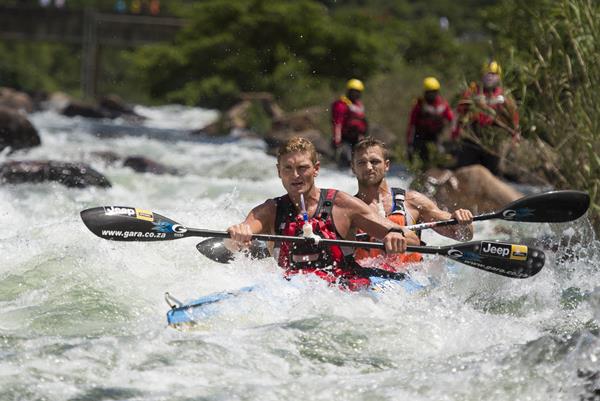 Mocké, who finished fifth with Craig Turton in 2012 in his only other Dusi attempt, was ecstatic with his podium finish and glad to have been a part of the iconic event.  “There isn’t another race in the country like the Dusi in terms of hype.,” said Mocké. “It is awesome to have finished on the podium and I’ve loved being a part of things again this year.”

Pope’s Canoe Centre’s Cam Schoeman and Jakub Adam of the Czech Republic gave it their all and, having paddled around Burma Road, held off the charging Thulani Mbanjwa and Lance Kime to finish on the bottom step of the podium.  “The last four days with Jakub have been cool but the whole journey with him has been awesome and we have spent quite a lot of time together and I am going to miss him when he goes back,” said Schoeman.

With the limelight firmly on Birkett and Zondi, a special effort from pre-race title hopefuls Kime and Mbanjwa on both days two and three saw them overcome their disasterous Commercial Road Weir incident on day one to fight their way back from seventeenth after stage one to fifth after stage two and finally claimed a extraordinary fourth position after Saturday’s third and final stage.

As Mbanjwa’s terrible Dusi luck continues, the entire paddling fraternity will be quietly hoping the tides will turn for him shortly, particularly after his and Kime’s monumental effort of immense character and determination.

Andrew Houston and Ivan Kruger also put in a noteworthy performance as they clinched the under-23 men’s title as well as a coveted top ten gold medal while junior boys winners, Damon Stamp and Mthobisi Cele, had their dream of a top ten shattered late in the stage, eventually crossing the line in a commendable eleventh place.

More information can be found at www.dusi.co.za.