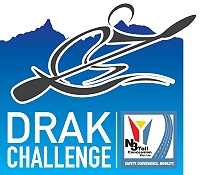 Underberg – Andy Birkett snatched a sensational maiden title at the N3TC Drakensberg Challenge Canoe Marathon on Sunday, exploiting a mistake by triple champ Hank McGregor in the closing stages of the race, while Abby Adie capped a heady weekend by winning a fourth women’s title.

Racing on a low uMzimkulu River Birkett (EuroSteel) and McGregor (Kayak Centre/Team Jeep) started the 23km final stage from Callaway Bridge to Hopewell Farm side by side, with McGregor having won the psychological advantage of winning the first stage.

The pair challenged each other through the final stage, but they were still locked together as they entered the Lower Gorge, just twenty minutes from the finish.

McGregor raced to the bottom of Mkhulu Rapid where he got stuck on some rocks, while Birkett took another line that he had researched and managed to get a 50 metre lead on McGregor.

“For the next two kilometres I looked back over my shoulder at every corner and every rapid to see if Hank (McGregor) was chasing me. Only when I realised that he had given up the chase did I start thinking about the fact that I might win the title,” said Birkett.

“I am really stoked with the win because it helps me prove to myself that my paddling is improving, and that I can mix it up with Hank McGregor and the flatwater marathon paddlers, said Birkett, who last year won the Under 23 World Marathon Championships title in Copenhagen.

The women’s title fell for a fourth time to Abby Adie (Best 4 Healthcare/Kayak Centre), who got engaged on the weekend to her boyfriend Kyle Solms. However her romantic milestone didn’t afford her any leeway from teammate Robyn Kime, who closed down more than half of Adie’s overnight lead on the final stage.

“I started in elapsed time and Robyn (Kime) was in the first batch, which made it very difficult to keep track on where she was relative to me,” said Adie.

Adie can now turn her full attention to her bid for the 2014 Dusi Canoe Marathon title, as her partner Ana Adamova has just arrived back in South Africa for the final run-in to the big race in February.

Kime won the CSA Silver medal with Michelle Burn grabbing the third step on the podium.

The field of 750 paddlers enjoyed the challenges of the low level river, in stark contrast to the flooded N3TC Drak Challenge raced last year.